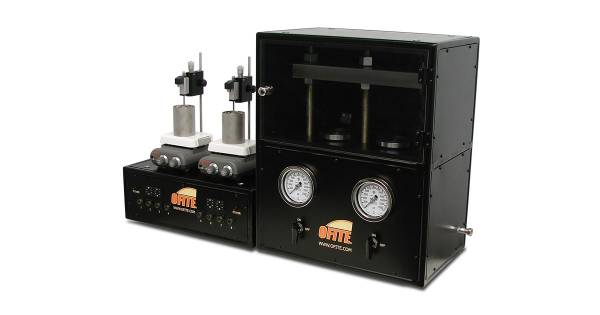 Shale swelling is a major cause of wellbore instability. It can lead to a variety of problems, such as hole sloughing, pipe drag, bit balling, stuck pipe, or other “gumbo” related issues. Shale swelling is caused by clay (one of the major components of shale) absorbing water, usually from drilling fluid. The proper drilling fluid additives can mitigate shale swelling and prevent the loss of the entire drilling operation.

The OFITE Dynamic Linear Swellmeter measures the interaction between drilling fluids and mineral samples containing clays. This instrument can test up to four (expandable to eight) samples simultaneously and compare the results over time. Each test consists of a cylindrical wafer of compressed bentonite, rev dust, or downhole sample. The wafer is constrained around its circumference and exposed to fluid. As the clay reacts to the fluid, the wafer can only expand linearly. A Linear Variable Displacement Transducer (LVDT) measures the expansion of the water while the software tracks the percent of swelling over time. Each station includes independent heating and stirring.

A typical test might include a base mud and then three different additives (or three concentrations of the same additive). At the end of the test, the graph will show which sample exhibited the least amount of swelling.

The Swellmeter is a very useful tool for designing drilling fluids for use in shale formations. To learn more, visit the product page.